On a client’s Modify Name Screen, you can now include Additional Producers to represent a Split Producer situation. You would choose the Producer who is the account executive most responsible for communications with the client as the Primary Producer and any other Producer(s) involved with the client as Additional Producers. If you have a Multi-Producer Version of Advisors Assistant, all Producers listed would have access to that name in the database. 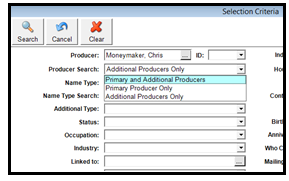 If there are Producers that often work together, you can also create a “Team” of producers. Your System Administrator would set up Teams of Producers under Admin | Producers and Teams. When adding an Additional Producer to a name, you would choose the Team instead of having to add each individual producer to the name. Each member of the team would have access to that contact.

Yet another way Advisors Assistant is always improving and adding new features to help make your life easier!